Friday was quite a big day! Agendashift’s second birthday, plenty of attention for the article Engagement: more than a two-way street, and an Agendashift Studio*, a small-scale workshop held in my studio office.

After lunch at our local farm shop we played Changeban. Changeban is based on our popular Featureban game, with slightly different mechanics, a Lean Startup-inspired board design (below), and an introduction to hypothesis-based techniques. 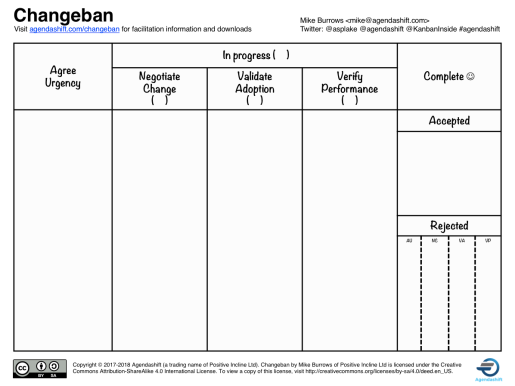 It went down a treat, generating these interesting comments:

Featureban’s great but I think I will start using Changeban with my clients instead. By not simulating a software development process, people who work outside of technology will relate to it much more easily.
– Steve

Absolutely agree. Not once during playing the game did we reference or talk about anything tech-related.
– Karen

Always keen to make language as accessible as possible (something the Agendashift delivery assessment is appreciated for), I’ve done another pass on the Changeban deck and removed all references to “features”. Instead of “feature ideas”, we have “product ideas”; “feature experiments” becomes “product experiments”, and so on. Small changes, but every little helps!

These new references to “product” also help to reinforce an observation made in the Agendashift book: tools designed for the product development space often have applicability in the organisational/process improvement space, and vice versa. Lean Startup is the perfect example of that!

If you’re a registered Changeban user, you’ll receive an update by email from me sometime in the next few hours. If you aren’t registered and would like to be, sign up here. We’re now up to revision 0.4; it seems stable enough to go to 1.0 once I get round to preparing a page of facilitation instructions (there’s a #changeban channel in the Agendashift Slack meanwhile).

*There is no calendar for these Agendashift Studio events – they’re self-organised via the #agendashift‑studio channel in Slack. If 3‑4 participants can agree on a date that works for me too, then we’re on! We’re based in Chesterfield, UK, close to the Peak District National Park.