Update (June 28th 2019): Over the months, the exercise referred to here by my working title Reverse Wardley has served us incredibly well. With full credit to Liz and Karl, it’s a great addition to our workshops and I love it! My name for it has proved way too nerdy for some tastes though, and after several iterations in the Agendashift Slack we may be settling on Option Visibility Mapping. If that changes, I’ll update this update! I’ve also added a new tag ‘mapping‘ to this and related posts.

Fantastic 2-day Workshop by @asplake on @agendashift so much information, tools and most of all: coherence in applying tools and methods.

So intense that I will have quite some time to digest it all before trying to apply it to my work. pic.twitter.com/Ynp9HOfylO

Thursday and Friday last week was the 2-day Advanced Agendashift workshop in London. The quick version of my takeaways (all confirmed by the retro stickies):

Also, details of the next four of these workshops – Boston, Berlin, Oslo, and Stockholm.

Announced only a couple of weeks ago, I would definitely recommend using Mike Haber’s template – it makes the exercise easier for everyone involved, and the output vastly more presentable. I’ve updated the Celebration-5W page to make it more prominent.

Also announced recently but previously untested, a beta version of the 15-minute FOTO cue card is now made official: 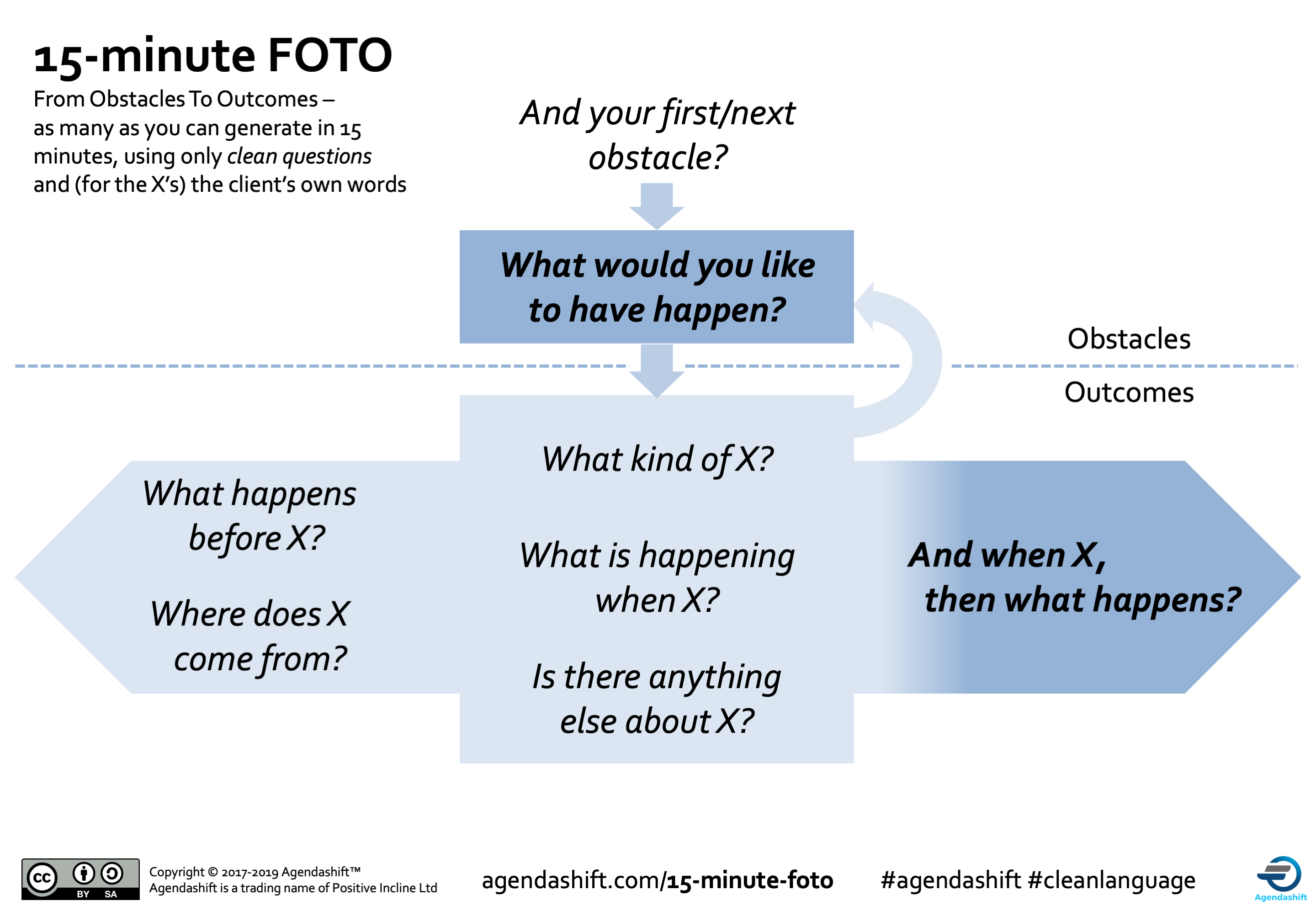 No-one missed the old “Is there a relationship between X and Y?” question (a question that comes with health warnings) and according to the retro sticky, the new question “Where does X come from?” rocks!

My “Rule of Three” seems to resonate

I mentioned my “Rule of Three” in answer to an important question about who should be invited to internal workshops. I had already written it up for my forthcoming book Right to Left but I was encouraged to put together a page for it with an easy-to-remember url, agendashift.com/rule-of-three.

After a few iterations on the text (helped by feedback in the #right-to-left channel in Slack), here’s the key quote: 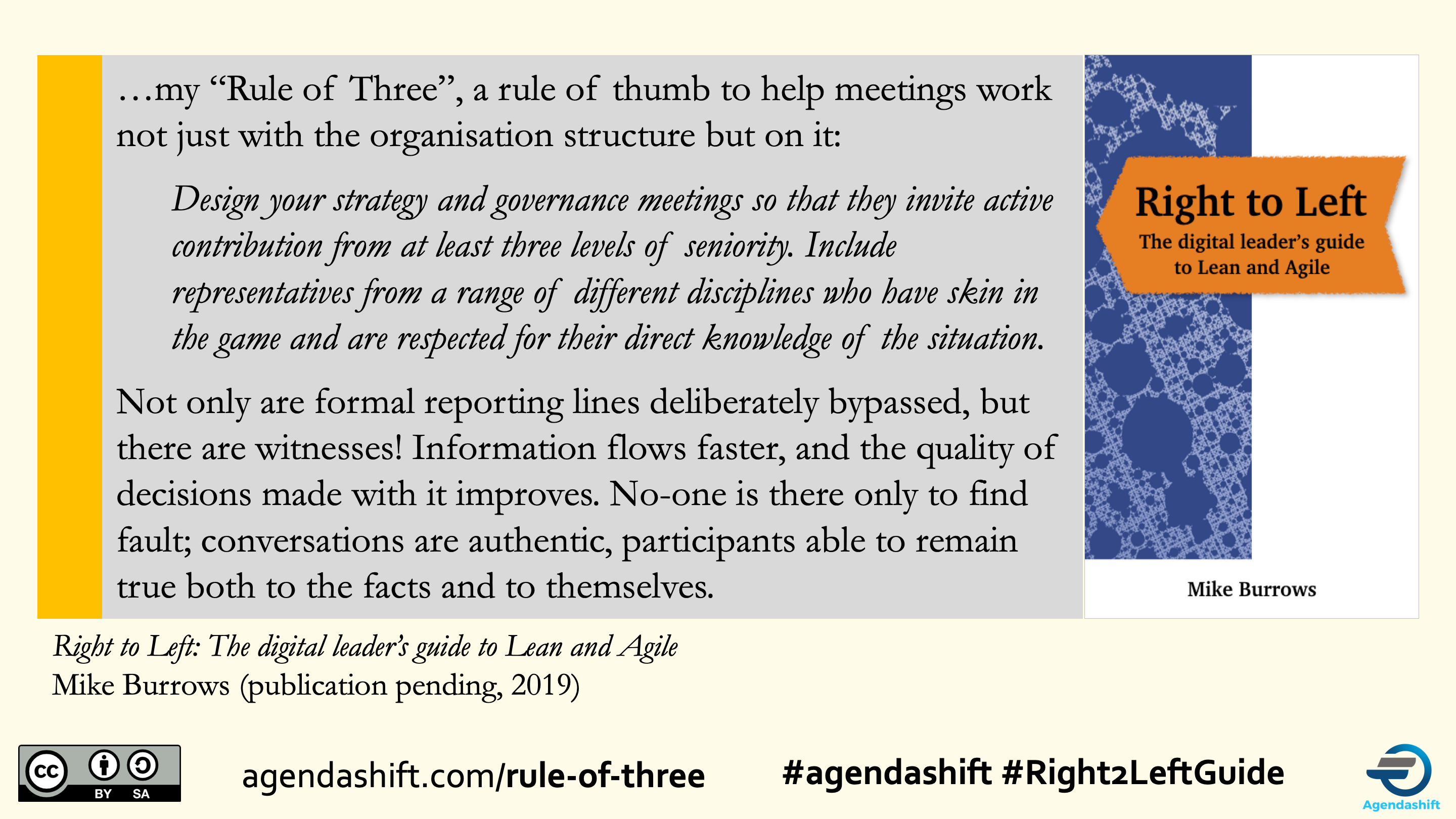 Clicking on the image or the link above you’ll find a condensed, bullet point version, and some notes that hint at what’s to come in the book.

Consolidating experiments described in Stringing it together with Reverse Wardley, The Cynefin Four Points exercise moves from day 1 to day 2, the launchpad for Mapping rather than the conclusion to Exploration. It allowed me to run “my slowest ever Discovery” on day 1, and nobody minded one bit.

Update: The name “Reverse Wardley” is (as we say in the UK) “a bit Marmite”, meaning that some loved it and others hated it. Is it “way too geeky”? This was already suspected, but I still don’t have a better alternative.

Remember Towards the wholehearted organisation, outside in (May 2018)? For the evening of day 1, Steven Mackenzie (one of Right to Left‘s reviewers) suggested we held a “Lean Curry” around the topic. Here he is with his heart-shaped picture:

Before Right to Left is even published, perhaps a spinoff! Definitely one to watch.

We are champions and enablers of outcome-oriented change and continuous transformation. Building from agreement on outcomes, Agendashift facilitates rapid, experiment-based emergence of process, practice, and organisation. Instead of Lean and Agile by imposition – contradictory and ultimately self-defeating – we help you keep your business vision and transformation strategy aligned with and energised by a culture of meaningful participation. More…
0
Loading Comments...