Update (November 2019): Over the months, the new exercise described here has served us incredibly well. With full credit to Liz and Karl, it’s a great addition to our workshops and I love it! The working title Reverse Wardley that I gave it is proving way too nerdy for some tastes though, and after several iterations we have settled on Option Relationship Mapping. I’ve also added a new tag ‘mapping‘ to this and related posts.

A few weeks ago in #workshops in the Agendashift Slack, Karl Scotland posted this:

Liz and I have just figured out how to use Wardley Mapping to create the Transformation Map. Muwahahaha.

The basic idea is to take the FOTO outcomes that get used in 4-Points, and re-use them in a Wardley Map, so the Transformation Map is more of a Wardley Map than a Story Map.

Vertical axis is “distance” from the customer.

As things turned out, I was the first to get the opportunity try an exercise that (for want of a better name) I’m calling Reverse Wardley. I’ve done it twice now, and it has gone down so well that not just this exercise but the string of exercises I’ll describe in a moment look set to be a fixture at future 2-day Agendashift workshops (and shorter ones, time permitting). If ever there’s a 2nd edition of the Agendashift book, expect to see it written up there!

First though, let me decode some of Karl’s shorthand:

So, with full credit to Liz and Karl (and indirectly to Simon Wardley and Dave Snowden on whose work this all depends), here’s the string of exercises with photos from two recent workshops, one a public workshop in Gurugram, India (before Agile Gurugram 2019), the other a private workshop for delivery managers at the UK government’s Department for Work and Pensions (DWP) in Leeds.

First, the outcomes generated in 15-minute FOTO are transferred onto stickies and organised Cynefin-style (as described at some length in chapter 2 of the Agendashift book): 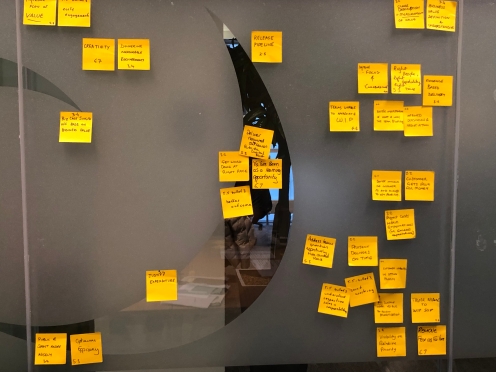 Stickies are then moved/projected onto an “x-axis of ambiguity” – “Ambiguous” outcomes with multiple and/or unknown solutions towards the left, “Clear” (obvious or best practice) outcomes towards the right: 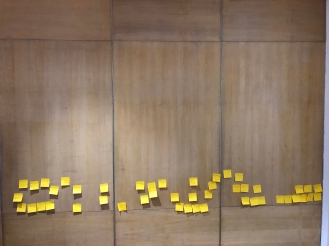 Next, we introduce a y-axis, moving stickies upwards according to their visibility to the customer/user. We did this silently, noting that some stickies were the focus of some silent debate that we replayed out loud afterwards (it turns out that vertical placement can be surprisingly but interestingly controversial): 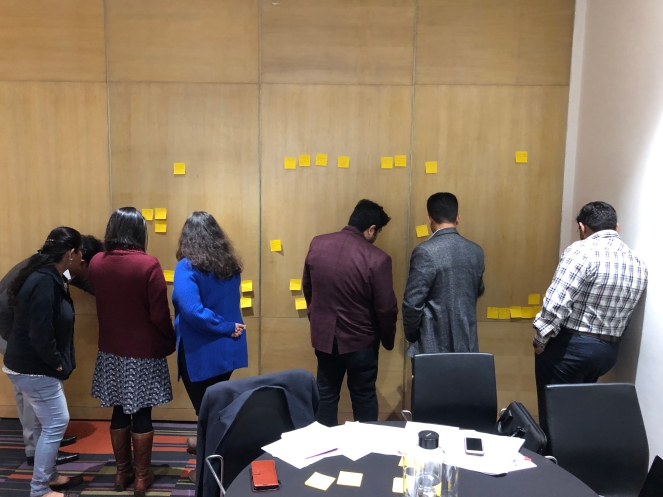 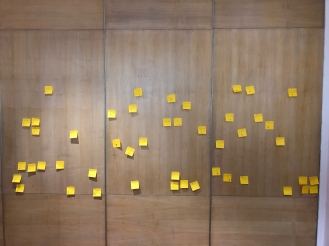 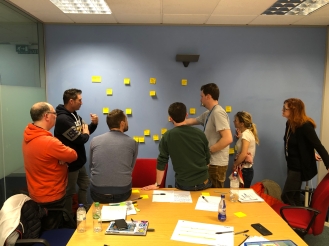 Without much in the way of prompting from me, it is apparent to everyone at this stage that:

To be clear, this isn’t a Wardley Map. A Wardley Map is anchored at the top on a user need, the value chain drawn below it (dependencies below, value flowing upwards), and the x-axis segmented into zones corresponding to product life cycle stages that don’t quite apply here (or that at least would take an unnecessary amount of explaining). We could perhaps have abstracted a top level user need from the headline items (but didn’t), and in any case, the items below don’t really constitute a value chain. Process-wise, it’s in reverse with respect to Warley Mapping, because it’s done bottom-up instead of customer-first, and x-axis before y.

Finally, we move the stickies yet again onto a third map, this time the story map(ish) representation. The trick here builds on one blogged previously: stickies from the bottom and the right of the Reverse Wardley representation go onto the story map first, the quick wins most likely being here. The thematic, headline items get transferred last, and go “above the line” on the story map if they might replace the original column names (their own being preferable to anything facilitator-provided): 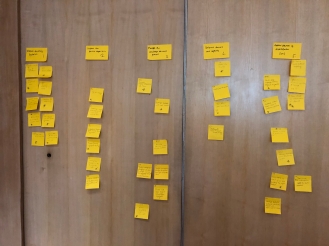 You might be wondering whether all this organising and re-organising of stickies is worth it, but here’s just a sample of the feedback, representative of both workshops: 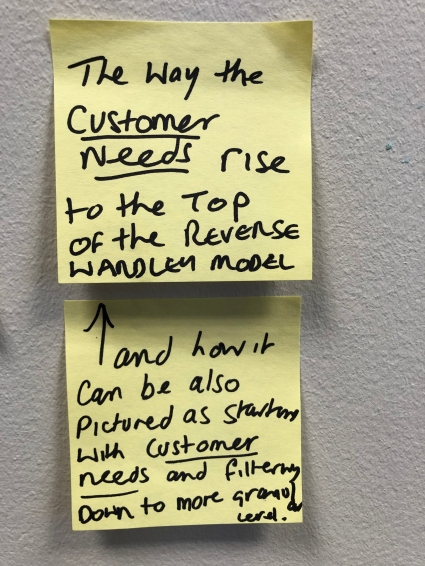 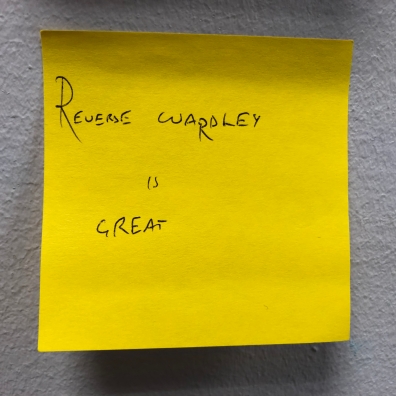 Here’s why I will continue to use these exercises in combination, stringing them together:

Much of Simon Wardley’s work is published under a CC-BY-SA license (as are several Agendashift-related resources) and it is highly appropriate that we do the same here. Stringing it together with Reverse Wardley, authored by Mike Burrows, based on an idea by Liz Keogh and Karl Scotland, and inspired by the work of Simon Wardley and Dave Snowden, is licensed under the Creative Commons Attribution-ShareAlike 4.0 International License. To view a copy of this license, visit https://creativecommons.org/licenses/by-sa/4.0/.

Also: Channel #agendashift-studio in the Agendashift Slack if interested in a cozy workshop with me at Agendashift HQ (Derbyshire, England).