As announced this morning to current and existing students, the “old” Leading with Outcomes will be retired soon, and its replacement will look and feel strikingly different.

Leading with Outcomes: Foundation goes into limited private beta this week, to be launched in full around the end of the year. We’re aiming for a much broader audience – all “leaders in transforming organisations” – and as the name suggests, it’s also the starting point for more. Henceforth, the name “Leading with Outcomes” covers a whole curriculum that reorganises the Agendashift Academy’s existing offerings (both self-paced and interactive) into three parallel tracks, for which the highly accessible Foundation module will be a prerequisite.

For more detail than that, you’ll have to wait for the announcements. Remember meanwhile our guiding principle: Agreement on outcomes before solutions – literally, leading with outcomes! If you share our desire to see more of that, up and down transforming organisations everywhere, then you understand the level of our ambition. We’re going to make it easier for more people to participate in the realisation of that vision, so if you’re with us, get ready.

The latest version of our Clean Language-inspired coaching game 15-minute FOTO was announced this week, and the announcement drew a lot of interest. Read it here:

Added this month to our media page:

What if we put authentic agreement on meaningful outcomes ahead of solutions?

In this edition: Agendashift Academy update; The 1967 manifesto for the Deliberately Adaptive Organisation; Get unstuck and get going; Upcoming; Top posts

What really happened: on the brink of releasing a new intermediate-level self-paced training module Outside-in Strategy with Outcomes, we decided that it would be much better to revisit Leading with Outcomes, our first self-paced training module. A big decision not taken lightly! As part of a significant pivot for the Academy itself, we’re now re-recording it, repositioning it for a much broader audience.

We’re adding, not taking away, and if you’re a practitioner of some kind (the main audience for the first version) there’s still plenty to be had from the second version. Still the familiar and well-tested exercises, but every session now connecting with leadership, speaking to a specific leadership theme, and with practical takeaways for leaders at all levels of experience. We think of it now as doing something foundational for transformational leadership, the Academy aimed squarely at “leadership and strategy in the transforming organisation”.

As allowed by the quantity and growth rate of the content – soon if we hit our stride as we expect – we plan to move to a subscription model, covering what will be an ever-growing portfolio of self-paced material and offering substantial discounts on interactive workshops. Meanwhile, we’re putting in place the infrastructure to better support corporate purchasers also.

Let me finish this update with a massive thank you to everyone who gave feedback on LwO version 1. Highly encouraging for the most part, and we took to heart your ideas for improvement. We think you’ll love version 2 – not just a refinement but a bold step!

The 1967 manifesto for the Deliberately Adaptive Organisation

The first of two more-than-usually successful blog posts this month:

It has provoked some interesting conversations and no doubt I’ll be returning to the topic soon.

Get unstuck and get going

The second of those posts was this one:

For “Practice Outcomes” (the name of a warmup exercise), now think “5% Outcomes, 15% Outcomes”. Typically we do it just before doing 15-minute FOTO for the first time, and an updated 15-minute FOTO will make reference to it. There’s another change in the wings to come on top of that, so watch out for version 11 soon.

Per my Academy update above, there are still no workshops in the calendar but we’ll be addressing that soon. Other events:

What if we put authentic agreement on meaningful outcomes ahead of solutions?

This post relates to 15-minute FOTO, our Creative Commons-licensed and Clean Language-inspired coaching game that’s not just for coaches – everyone gets a turn! Consistently, it’s a highlight of our workshops: it’s fun, insightful, and surprisingly practical. Above all, it’s the tool by which we generate outcomes – outcomes being the currency in which we deal.

For several weeks the 15-minute FOTO dropbox (which you can subscribe to for free) has included a beta version of the cue card (below) which adds the text “aka the And When X… game“. The facilitator’s deck has a slide with that as its title too. It’s a low effort / high impact tweak, a helpful reminder to the facilitator to introduce very briefly a little of the theory and practice of Clean Language. After exhausting my old stock of cards (I get them printed by the hundred) I had the opportunity to test the new one last week and the beta tag is removed at last! 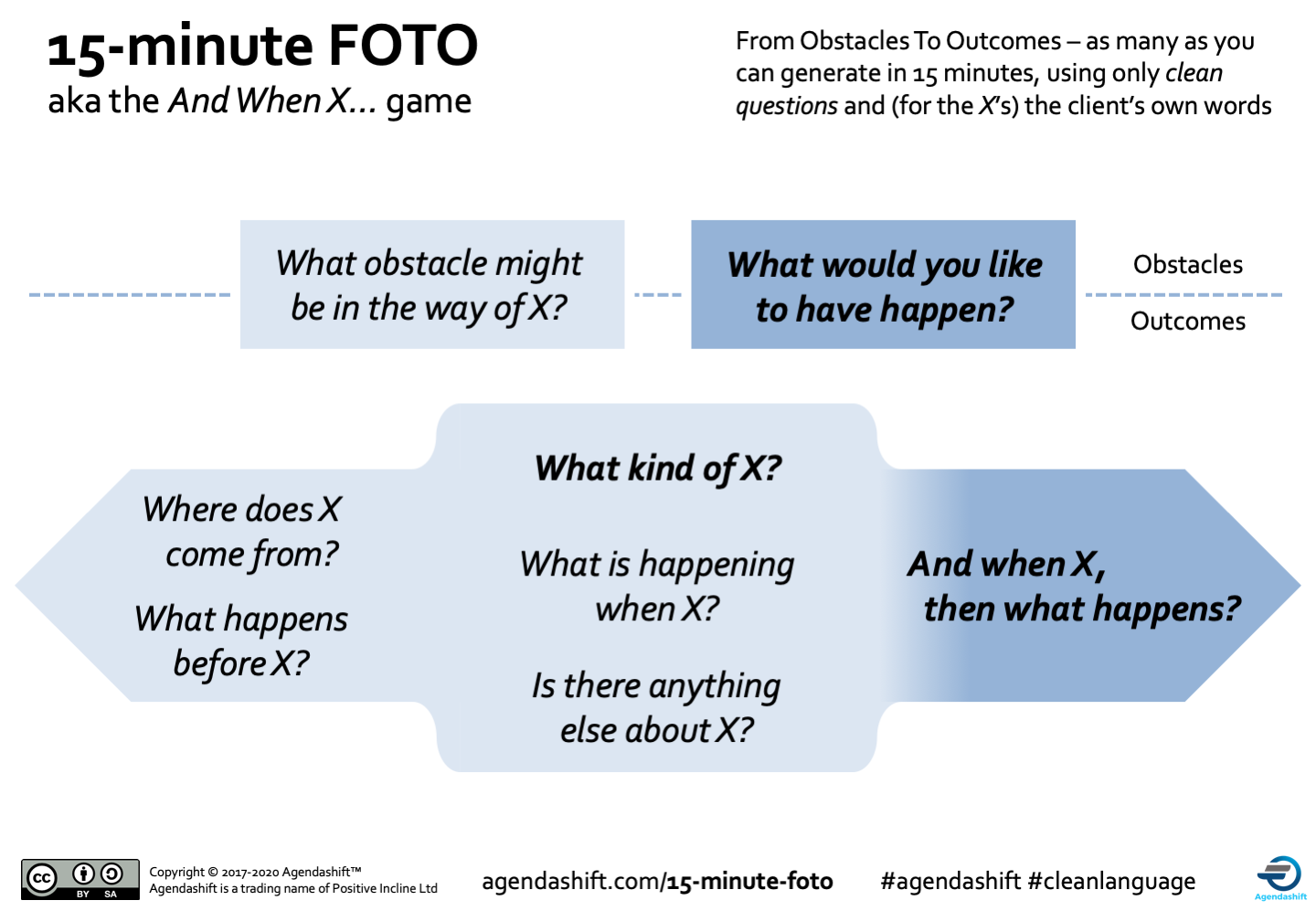 The Clean Language questions have been carefully curated and refined over the years to minimise the coach’s natural tendency to pollute a conversation with their unasked-for assumptions and solutions. Keeping the conversation ‘clean’ maximises the chances that the client will achieve an insight of their own.

An important part of the discipline is to stay with the client’s language. One question you won’t hear in a clean conversation is this (the X and Y here are placeholders for the client’s and coach’s words respectively):

What you said X, did you mean Y?

Put words into the client’s mouth like this and there’s a high risk that whatever the client was currently holding or constructing in their head (their model, a precious and perhaps fragile thing) will be destroyed. Potentially, a huge opportunity wasted! So, if as the coach you find yourself a bit lost (ie you’re unsure what X is or how to deal with it), turn instead to the “pre-question”:

Three things have been achieved already:

And you have plenty of choice here. If it’s important that you (in the coach role) understand what X is, then ask a clarifying question, probably one of the middle three on the card. If it’s not – and let’s not forget here that the conversation isn’t about you – you could decide to move the conversation along instead and see what happens.

There’s another use for this technique, and that’s to go back to an earlier part of the conversation. Perhaps the conversation is uncovering a virtuous circle of outcomes (not uncommon, but congratulations!) and after a certain amount of repetition you’re ready now to jump off that roundabout. It’s easy:

Is there anything else about X?

This is for some past X, allowing the conversation to take a different branch. You’re right, the “And when X…” isn’t strictly necessary. Yes, it’s a bit redundant. But it helps! Somehow, that big leap back seems more manageable.

For a 20% saving, use discount code LONDON2020 for the London workshop and NORDIC2020 for Oslo and Malmö.

See also our workshops and events pages – Switzerland and Australia to be added soon.

15-minute FOTO is our Clean Language-inspired coaching game, and version 7 of the facilitation deck is out of beta. On top of the usual minor improvements – fewer slides, better wording, that kind of thing – the big new thing is a new ‘Lite’ edition.

To understand why we’ve wanted to make changes, consider what each participant is doing when they play the game for the first time:

That’s a lot! Instead of doing this all at once, the Lite edition starts with a familiarisation exercise, turns the conversation into one for the table group as a whole, and the objective matters only after everyone has had a chance to get comfortable with it all.

If, as happens in many of our workshops, you plan to do 15-minute FOTO twice, you can start with the Lite edition and do the classic edition the second time round.

Another motivation for this new version is that it enables new strings of exercises for new workshops. I’ll be announcing the first of those very soon, perhaps as early as tomorrow.

When you subscribe, you’ll be sent a link to the 15-minute FOTO Dropbox folder and you can download materials (cue card and the deck) from there. Add that folder to your own Dropbox and you’ll get all updates automatically.

Get a taste online

By the December 11th if not November 22nd, there will be a version 8 that explicitly supports online use (the classic edition already does). Consider that announced 🙂

The best place for questions about 15-minute FOTO is the #cleanlanguage channel in the Agendashift Slack.